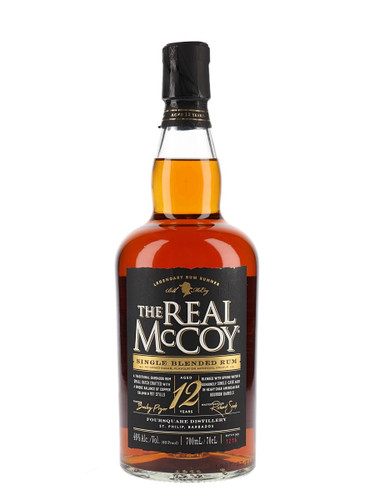 A 12-year-old single blended rum from The Real McCoy, made at Foursquare distillery in Barbados. The nose offers aromas of buttery oak and spicy dark chocolate, and the palate offers notes of caramel, oak spice, orange zest, tobacco and pepper, with a hint of smoke in the finish.

The Real McCoy Rum is based on the story of Bill McCoy, the pioneer rum runner of the Prohibition era. In January of 1920, McCoy was the first to fill a boat with alcohol in the Caribbean, sail it up to New York City, and legally act as a floating liquor store three miles off shore. McCoy was careful to always stay outside the three mile limit, which was international waters in the early days of Prohibition in America.

McCoy made a name for himself because he never adulterated the alcohol. While copy-cat rum runners would dilute their alcohol with wicked chemicals like turpentine, wood alcohol and prune juice, McCoy never did.

Fast forward to the twenty first century, Founder and CEO, Bailey Pryor, came up with the idea to make The Real McCoy Rum while producing a documentary film about Bill McCoy for Public Television in the United States.

During his research for the film, Bailey traveled to the Caribbean island of Barbados, where he met Richard Seale, the 4th generation Master Distiller at his family-owned Foursquare Distillery.

Together, Bailey and Richard developed a classic style Barbados rum, adhering to McCoy's strict regimen of never adulterating the rum with added sugars, flavors or perfumes. The resulting rum is artisan crafted in small batches, using a rare combination of column and pot still distillate, and authentically aged in American oak bourbon barrels. The goal was to make a rum that actually lived up to the name "The Real McCoy."

Column-distilled in Latin America, Rathlee’s then makes its way to Cornwall in charred white oak cas

An excellent golden rum from the talented folk at R.L. Seale's Foursquare distillery in Barbados. Do

One of the legendary winemakers of the world, Bruno Giacosa joined the family business at the age of

A Mossburn bottling of 11 year old Glenrothes single malt, distilled back in 2007 and left to age un

This Ardmore single malt was distilled back in 2008, before it was whacked into a cask for the ensui

Taylor’s Port is the leading premium Port brand in the UK. They were the first to pioneer a dry whit

This Chardonnay revels in its fresh, rich tropical fruit flavours best with light and spicy dishes b