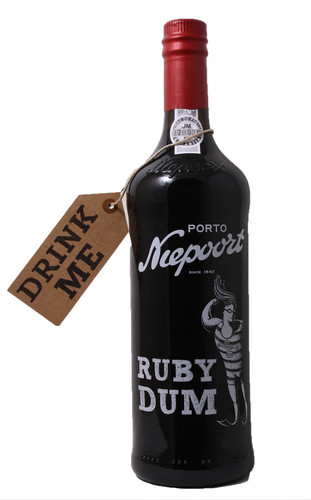 Dark red in colour with a fresh vibrant aroma of dark fruits which follows through on the palate along with an almost mineral character, a youthful wine with good extract and great balance. Drink after a meal on its own or with soft cheeses. (No decanting is necessary since the wine contains no sediment).

Ruby Dum and Tawny Dee - the Niepoort 'twins' as reflected on the bottles. These wines come from the same lot, but over a five year period are aged differently so that the one is rich and ruby in style, while the other becomes paler and more tawnied. A rather novel and fascinating new approach which in our view really works well. Both wines are very drinkable indeed.

Bucking the trend once again, as is his way, Dirk Niepoort proudly declared his excellent Vintage Ports in 2015 unlike the rest of the top producers - and this year he is declaring only the Bioma. This is his superior Port from a single plot on a steep slope.' From our tasting this declaration is totally justified. The wine is superb and fascinating. At Niepoort the aim is harmony and balance these are both here with the Bioma 2016 - but it is also a more cerebral wine than others released - a different feel - this is off-beat perhaps but in a good and beguiling way.

At the same time that famous English names were establishing themselves in the Douro, the other great Port importing nation - the Netherlands - was sending bright business types to set up Port Houses. One such was Franciscus Marius van der Niepoort. Five generations later and the dynamic Dirk van der Niepoort is at the helm.

Niepoort used to be well-known for their Tawny and Colheita ports, but Dirk has worked tirelessly to raise the profile of their Vintage Ports too. One of the key moves, with this in mind, was for Niepoort to purchase their own vineyards with Quintas de Nápoles, do Carril and do Passadouro coming under the Niepoort wing at the end of the 1990's.

A tart yet sweet liqueur whose flavour is dominated by red ruby grapefruit from Corsica. Made by the

Port, Pate and Luxury Cornish Cheese Biscuits - perfect gift for anyone for that after dinner nibble

Bin 27 is a Reserve Port, made using the same approach to making a late-bottled vintage, with extend

A benchmark, organic, Muscadet from one of the best producers of the western Loire. A perfect wine t

The Francophile Syrah - 250ml Can

Rick, the Cape Crusader would be the first person to embrace innovation and help pioneer new formats