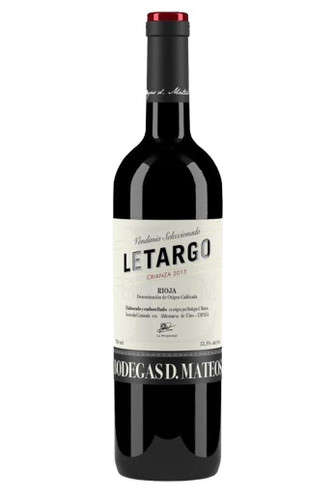 Letargo Rioja Crianza is full and rich. Notes of Prunes and aromas of toasted bread and vanilla, with a sweet, mineral and a long finish.

The Mateos project started more than three decades ago when the first vines were planted. Ever since then, they have been dreaming of the idea to create unique wines. The aim to transmit all the potential and personality of this unique environment.

A distinct characteristic of Rioja wine is the effect of oak aging. First introduced in the early 18th century by Bordeaux influenced winemakers.  The use of oak and the pronounced vanilla flavours in the wines has been a virtual trademark of the region though some modern winemakers are experimenting with making wines less influenced by oak. Originally French oak was used but as the cost of the barrels increased many bodegas began to buy American oak planks. They would fashion them into barrels at Spanish cooperages in a style more closely resembling the French method. This included hand splitting the wood, rather than sawing, and allowing the planks time to dry and “season” in the outdoors versus drying in the kiln. In recent times, more bodegas have begun using French oak. Many will age wines in both American and French oak for blending purposes.

This Rioja Crianza, made from Tempranillo with a judicious touch of Mazuelo, displays enticing aroma

Selected from old vines Viura vineyards located in the Sonsierra area of Rioja. This wine is a revel

Warm cherry characters broaden out this delightful Rioja, nicely finished by a touch of spice and va

Deep and vibrant Malbec with an intense nose of plum, damson and dark chocolate aromas. Lush and lay

Selected from old vines Viura vineyards located in the Sonsierra area of Rioja. This wine is a revel

This Rioja Crianza, made from Tempranillo with a judicious touch of Mazuelo, displays enticing aroma

A selection of truly amazing wines from Spain's most famous wine-making region, this case consists o

Graci Etna Bianco is an organic white wine, aged on lees and made in the DOC Etna Blanco (Sicily) It