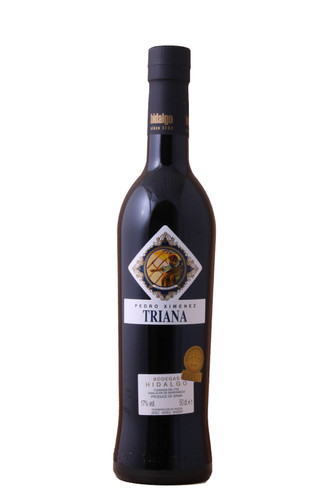 Pedro Ximenez is made from sun-dried grapes and left for many years in oak casks to mature.  It is a dark, rich and opulently sweet sherry wine with a dried plum flavour as well as chocolate molasses, butterscotch and raisins on the nose. Satisfying luscious finish with plenty of honeyed toffee. Try serving a shot of Pedro alongside homemade ice cream, or save it for the Christmas pudding. Serve slightly chilled.

The Hidalgo family moved from northern Spain to Andalucía in the 18th Century and began producing Sherry in 1792. Since then, the business has remained a family concern through six generations; they still produce wines in the same premises in the centre of Sanlúcar de Barrameda as they did two centuries ago. Keeping the operation small, owning 200 hectares of vineyards and focussing on quality over quantity has enabled them to produce some excellent Sherries.

Droderigo de Triana was a local man who sailed with Columbus to the new world. He was in the crow’s nest of the ship when the coast of what we now call the Americas came into view.

Darker than the night and richer than Croesus: this is to be poured, nonchalantly, onto vanilla or c

One of the world’s oldest and rarest dessert wines with a staggering 430 g/l residual sugar level. T

Darker than the night and richer than Croesus: this is to be poured, nonchalantly, onto vanilla or c

Pastrana is a single vineyard for the production of this unique dry sherry, and is situated on the c

The Block Series Carménère is produced with grapes from the 22, 27 and 28 Quarters of their Mingre E

Limoux, in the southwest, is reputed to be the first French region where winemaking monks intentiona

Bone-dry and thirst-quenchingly refreshing, La Gitana Manzanilla is the perfect aperitif or accompan

Essentially, this wine was made pretty much the same way they make their red wines. They made 4 barr