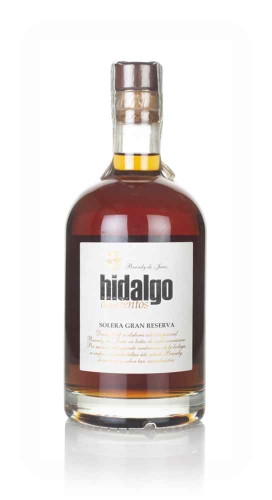 Denominacien de Origen: Brandy de Jerez, Sherry Brandy, comes exclusively from the Sherry District. The production and ageing of the Sherry Brandy follows the traditional methods of the region.

The brandy is obtained from grape distillate and then aged in butts of American oak for several years. The casks have previously been used in the ageing of Cream and Oloroso Sherries, which ensure that the brandy gains exceptional smoothness with ageing. The ageing system used is known as the Solera system,(fractional blending) which consists of a continuous mix of young brandies with older ones resulting in a brandy of consistent quality.

The base brandy that formed this particular 'solera' originated from the cellars of one of the members of the Hidalgo family where it had been kept under lock and key for two generations without being touched.

Aged for 10 years in the Solera and Criadera maturing system. A selection of old casks which previou

Hidalgo 200 was created to mark the 200th anniversary of the family business. The solera system used

A Spanish brandy from Bodegas Hidalgo! As the name suggests, Solera Fabuloso is drawn from a solera

Produced in Tarragona, Catalonia from chardonnay grapes. A balsamic vinegar, made by combining re

Produced in Tarragona, Catalonia from cabernet sauvignon grapes.   A balsamic vinegar, made by co

The rose expression of their Classic Cuvee. Aged a minimum of 45 months, this Chardonnay-led blend w

The Hambledon Classic Cuvee is a well-balanced blend of all 3 traditional grapes (Chardonnay, Pinot

Distilled in 1972, this Armagnac by Baron de Lustrac would make an exceptional gift for a special oc

Distilled in 1962, this Armagnac by Baron de Lustrac would make an exceptional gift for a special oc

This corking reposado is aged for between 4 and 6 months in white oak. It is made 100% blue agave fr