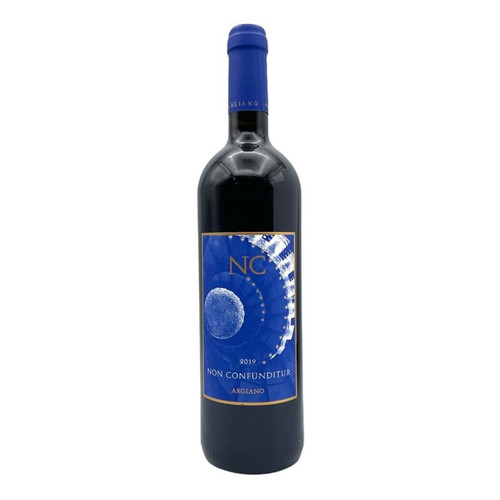 Non Confunditur is a Latin term that means unique, unmistakable. A blend of French and Italian grapes: 50% Cabernet Sauvignon, 20% Merlot & 30% Sangiovese all vinified separately. Before blending, the wines are aged for 6 months in one year-old French barriques or two-year-old tonneaux. After blending, they are aged for a further period in stainless steel. This is a 'Super Tuscan' for IGT wine price. Well structured with concentrated, red and black fruits with lovely integrated and smooth tannins. A great value wine from an historic and revered producer in Tuscany.

Non Confunditur is a wine with a decisive, full-bodied character, smooth tannins and a persistent finish. This blend of Cabernet Sauvignon, Merlot and Sangiovese reveals an exciting potency, with the innate gentleness of Merlot creating a bridge between the evident earthiness of Sangiovese, the aromatic blackcurrant flavour of Cabernet. The result is a generous, rounded red wine, destined for short to medium ageing, with delicious aromas of currants and generous fruit flavours.

Argiano’s history dates back to 1580, when the Pecci family of Siena began the construction of a magnificent villa, complete with vast cellars. In 1967, Argiano, which is the south west quarter of the Brunello appellation, was one of the founder members of the Consorzio di Brunello. In 1992 Contessa Noemi Marone Cinzano bought the estate and engaged the world-famous Giacomo Tachis (the creator of Sassicaia, Tignanello and Solaia) as consultant oenologist. It was he who launched Argiano’s Super Tuscan, Solengo. Under his guidance, too, the Sangiovese vineyards were extended, and the cellars modernised.

In 2013, André Esteves, a Brazilian financier bought Argiano. Since then, he has provided funds for a massive updating of the entire estate. New cellars have been built, the villa is undergoing an extensive renovation programme and the vineyards have been mapped into six separate zones by the acclaimed Chilean terroir consultant, Pedro Parra. In consequence of the switch to organic methods, the bee population has soared throughout the estate, which covers 125 hectares, 70 of which are under vine.

The Viento Aliseo Graciano Cabernet Sauvignon is a straight 50/50 blend of the two grapes. It is a c

Zesty, aromatic and refreshing with gooseberry and guava fruit flavours.

‘New London Light’ (NLL) is a critically acclaimed, bold and refreshing non-alcoholic spirit with an

Dolcetto, Barbera and Nebbiolo come together to create an exciting and approachable release. ‘Ne!’ i

The Italian Job! Our 6 bottle mixed case explores the fantastic Country of Italy from the very North

Distilled in 1972, this Armagnac by Baron de Lustrac would make an exceptional gift for a special oc

Domaine Sorin de France Saint Bris - Half way between Sancerre and Chablis!  This is Sauvignon from