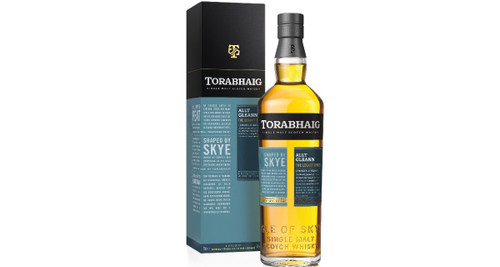 Torabhaig has unveiled its second single malt Scotch whisky, Allt Gleann – The Legacy Series. The new offering follows the release of Legacy Series 2017, which hit shelves and sold out back in February.

Named after the burn that flows down the side of the distillery in Teangue, on the Isle of Skye, Torabhaig Allt Gleann will be bottled in small batches at 46% AB and drawn from no more than 30 casks. It will be released in four separate batches throughout 2021 and 2022.

“Allt Gleann will be the second of four expressions to be released under the Torabhaig Legacy Series, each capturing a stage on the journey from inception and youth through to coming of age and full maturity,” said the brand. “These initial bottlings represent an opportunity for Torabhaig Distillery to develop its style and character, ahead of Torabhaig Single Malt Whisky 10 year old, due to be released in 2028.”

Torabhaig is the first Scotch distillery to be built on the Isle of Skye in 190 years and the second legal distillery ever to operate on the island. The team behind Torabhaig has been making whisky since January 2017, blending traditional and contemporary approaches to distilling. They use traditional wooden washbacks for fermentation and classic twin copper stills.

From the Kaikyo Distilley comes Hatozaki Pure Malt, made with 100% malt whiskies, including stocks d

Matured in sherry casks, the majority of which were first-fill, this is a sweet and spicy whisky wit

Two popular and most beautifully packaged bottles in our luxury gift box. In a gift box will be; The

So-named because the current owner's great grandfather worked for the local railway company, this 15

Light and leafy with a hint of pear and blossom. An easygoing match for almost anything.

Mr Goose Esq Shiraz is from the Berton Vineyards in Australia whose vineyards are in High Eden, a su

"MIREA, I've just drunk a wine named MIREA! And suddenly that name, will never be the same, MIREA! S