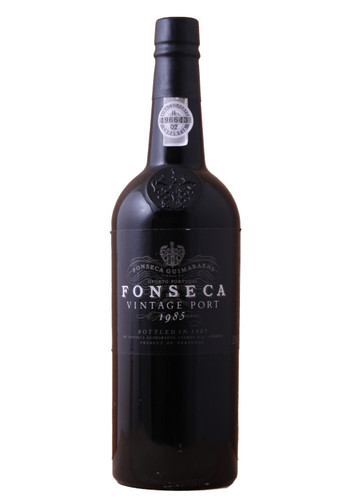 The full round palate is supported by thick well integrated tannins and delivers an abundance of luscious chocolate and blackcurrant flavour which lingers into the long velvety finish.  A wine poised between youth and maturity.

NOTES ON THE YEAR

The 1985 vintage was preceded by an exceptionally cold, wet winter, with night temperatures well below freezing in early January. Berryset was excellent and the young bunches perfectly formed.  The summer was hot throughout the region, with no rainfall during July and August.

Fonseca picked earlier than most other shippers and the harvest was brought in under ideal conditions before the rain which fell later in the month of September.  Conditions were ideal for fermentation resulting in must of exceptional colour and weight.

A 1985 vintage port from famous producer Taylor's. It has developed very well since bottling and is

Bin 27 is a Reserve Port, made using the same approach to making a late-bottled vintage, with extend

A 1985 vintage port from famous producer Taylor's. It has developed very well since bottling and is

Taylor’s is one of the most highly respected producers of aged tawny Port wines.  20 Year Old Tawny

Château Rieussec has been a leading wine in Sauternes for several generations. Ranked as a Premier G

Del Duque shows a dark golden colour due to the extended time spent in cask. On the nose sharp aroma

This rare parcel came into Rick’s view in March 2020, when he was presented with a bottle, still on

The Liberator The Bishop of Norwich Cape LBV

The Bishop of Norwich has become something of a seasonal offering. Produced from a vineyard planted

Made by Andrew Shorrock in Goosnargh near Preston, the Lancashire Bomb Cheese is a true regional cla