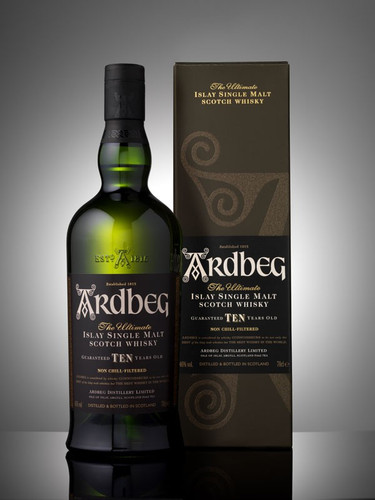 Ardbeg Ten Years Old single malt whisky is a very special bottling for the Ardbeg distillery as it is the first non-chill filtered whisky in the Ardbeg range. Chill filtering isn`t a bad thing, in fact it created real consistency of product when the whisky industry was a little more `hap-hazard` than it is today. Ardbeg Ten Years Old is whisky with none of the goodness taken out and as good as straight from the cask.AromaA burst of intense smoky fruit escapes into the atmosphere peat infused with zesty lemon and lime, wrapped in waxy dark chocolate.Bold menthol and black pepper slice through the sweet smoke followed by tarry ropes and graphite. As you dip your nose in further, savour the aroma of smoked fish and crispy bacon alongside green bell peppers, baked pineapple and pear juice.Add water and breathe in the vortex of aromas rising from the glass. An oceanic minerality brings a breath of cool, briny seaspray on chalky cliffs. Waxed lemon and lime follows with coal tar soap, beeswax and herby pine woodlands. Toasted vanilla and sizzling cinnamon simmer in the background with warm hazelnut and almond toffee.TasteAn explosion of crackling peat sets off millions of flavour explosions on the tongue: peat effervesces with tangy lemon and lime juice, black pepper pops with sizzling cinnamon-spiced toffee. This is followed by a wave of brine infused with smooth buttermilk, ripe bananas and currants. Smoke gradually wells up on the palate bringing a mouthful of warm creamy cappuccino and toasted marshmallows. As the taste lengthens and deepens, dry espresso, liquorice root and tarry smoke develop coating the palate with chewy peat oils.FinishThe finish goes on and on long and smoky with tarry espresso, aniseed, toasted almonds and traces of soft barley and fresh pear.

Arran 10 year old is a medium-bodied, citrussy dram that shows an elegance and deftness of touch tha

Here we have an absolute classic Speysider from a long-time family-owned distillery. This 25 year ol

Vesper is a special cuvée from Delamain, with the Cognacs used all coming from the Grande Champagne

The source of Finlaggan has remained a very closely guarded secret. To tell the true origin of Old R

A great blended malt and grain whisky from Compass Box. This was specially crafted by John Glaser, t

Love Speyside single malts? Then you NEED to check out this Speyside blended malt from historical Lo

Legend tells of the devil’s ambition to take Cornwall for himself. One day while looking out to the

This Antinori family’s historic label, since the 2011 vintage Marchese Antinori has been produced wi