Vasco & The Explorers Alvarinho - 250ml can 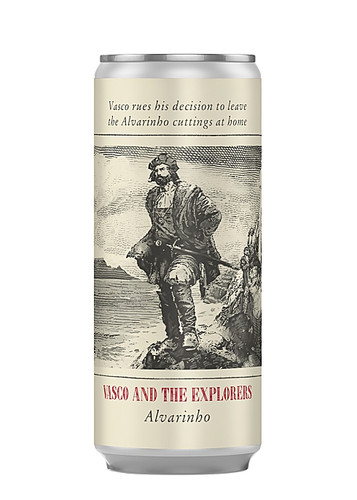 Vasco & The Explorers Alvarinho - 250ml can

Alvarinho is the Portuguese name for the extremely popular Albarino however this is actually produced in South Africa but with a nod to the Portuguese explorer Vasco da Gama. The Cape has certainly never been more innovative, with Portugal's great grape producing a crisp, zingy, citrus white, with surprising depth and complexity on the finish.

Wonderfully simple, easy to store and no corkscrew required. No pressure to open and finish a whole bottle, no chance of that dastardly cork taint and, being lighter and easier to recycle, much better for the environment than glass. And now you can get cans filled with liquid chosen by a bona fide Master of Wine.

As a panel taster for South African Wine Magazine, a contributor to the highly respected Platter’s South African Wines Guide and a certified Master of Wine, Richard Kelley is one of the most respected authorities on South African wine in the world. Over three decades in the industry, this Cape Crusader has made a lot of friends throughout that great winemaking nation. Every time he visits the Cape, he pops in to see his buddies and rummage through their cellars, uncovering great wines that don’t quite fit in the winery’s portfolio, are deemed too experimental or that they plan to simply fill into big blends. On discovering these gems, Richard – going by his alter ego Rick – ‘liberates’ them, bottles them and sells them under the small-batch label The Liberator.

Vasco and the Explorers is an adventurous South African take on the Portuguese grape, Alvarinho – maybe better known by its Spanish name, Albariño. Named after Vasco da Gama, the first European to reach India by sea, via the Cape of Good Hope. Apparently, he forgot to drop any vines off on his way round. But if he had, South African wine might have been more Iberian influenced, rather than being dominated by French varieties. And that might have been no bad thing judging by this South African take on Vinho Verde. Perfect for a weekday treat, a rendezvous in the park, or adding a splash to dinner while leaving enough for a glass for you.

Rick, the Cape Crusader would be the first person to embrace innovation and help pioneer new fo

The Francophile Syrah - 250ml Can

Rick, the Cape Crusader would be the first person to embrace innovation and help pioneer new fo

Premium organic white wine from the Navarra region of Spain produced from Garnacha grapes. Be

In 1890 the banker Carl Gunderloch purchased the "Gunderloch" manor house in Nackenheim. He also pur

One of the legendary winemakers of the world, Bruno Giacosa joined the family business at the age of

This Chardonnay revels in its fresh, rich tropical fruit flavours best with light and spicy dishes b

The Appassimento Rosso Puglia is a full bodied wine made from carefully selected Negroamaro, Malvasi