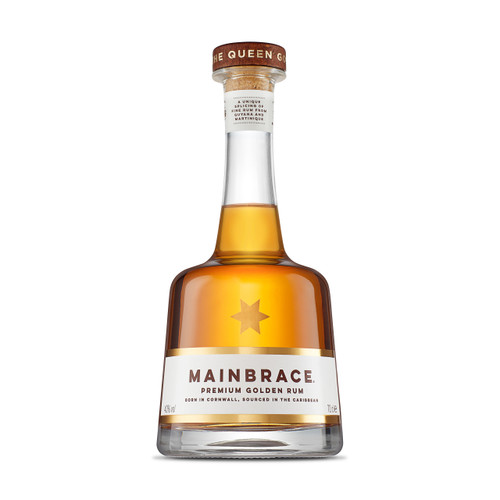 Mainbrace - A naval term that celebrates courage, teamwork and friendship forged in the heart of battle. In the days of sail, the main sail was steadied, or braced, with a thick rope called the Mainbrace. If it was cut by enemy fire, a team of sailors had to splice the mainbrace back together whilst under fire to save the ship and win the battle. As a reward for successfully achieving this titanic task, the captain would order the ship’s purser to issue a double ration of rum or gin to the team as a toast to victory.

Mainbrace Rum began its journey on a sunny day at The Ferry Boat Inn, on the Helford River in Cornwall. ​They had spent the day watching the gig rowers racing on the river and as one boat's crew celebrated their latest win with a tot of rum, we knew we wanted to bottle that moment of celebration and friendship.

​As a family of varied tastes they wanted to create something that would fit perfectly into a refreshing long drink, a sophisticated cocktail or to be savoured neat. ​They eventually settled on a unique blend of two distinct and never-before bottled styles to produce a smooth, perfectly balanced golden rum with no additives. This splicing of two rums got us thinking, and, knowing the old saying of “Splice the Mainbrace”, we thought it perfectly encapsulated the product and spirit of the rum. With that, Mainbrace Rum was born!

Mainbrace has been traditionally crafted with a modern twist, Mainbrace is a unique golden 'spliced rum'. A premium blend of 2-5 year old rums from 3 different stills in Guyana and an unaged Agricole from Martinique. The nose is initially dominated with notes of dried fruits and toffee, as you give it time to it offers notes of sweet apple and spices. The pallet starts with grassy notes that quickly give way to caramel and toffee nuances. The finish is long and smooth with a subtle warming spiciness, an extremely well balanced rum.

Perfect sipped neat, in a cocktail or in a simple serve like Mainbrace & Tonic.

“The last bird home from the storm” Petrel is a small batch botanical rum, fermented, distilled and

A tropical mango rum packed with feisty flavour. It’s a tangy hit exploding with mango, the taste of

A delicious gold expression from the Cape Cornwall range of rums! A base of aged Caribbean rum

A 40% ABV rum fermented, distilled and aged in Cornwall. Carrying a light spice and botanical flavou

“The last bird home from the storm” Petrel is a small batch botanical rum, fermented, distilled and

Rosemullion Spiced Rum is 100% single pot distilled and aged with selected spices. They are one of t

Inspired by the coasts of Cornwall and the Caribbean. Twin Fin begins life on the warm sands of the

Bruce was the third generation of the Christopher family to work Boro Farm on Tresco. Fishing off th

100% single pot distilled rum, aged with a chocolate, raspberry and mango to complement the Cornish

Rum...but not as you know it. Carefully crafted from Cornish water and raw Muscovado sugar.  Comple

Scilly Spirit is being produced in Old Town on St Mary's, Isles of Scilly - 28 Miles South West of m