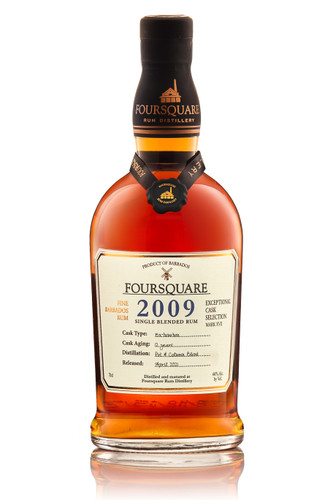 One bottle each of Foursquare 2009 Exceptional Cask Selection Rum and Doorly's 14 year old Rum. Maximum one order per household due to the VERY limited nature of the Foursquare 2009 Rum!

2009 represents the latest release from Foursquare Distillery, Barbados. The seventeenth release (Mark XVII) in the Exceptional Cask Selection, continuing the award-winning Vintage series which launched with the ground-breaking, and critically acclaimed 2004. The 2005 release was awarded Supreme Champion at the International Spirits Challenge in 2018, the first time that a Rum has ever attained the highest award at the competition. The 2007 Vintage continued the award-winning run, with 2008 taking a double gold at the ISC, and the Rum Trophy at the IWSC. Expectations are set to be met with the release of the 2009 Vintage.

2009 is a Single Blended Rum, in that it is a blend of heavy and light marques Rums distilled in the copper double retort potstill and the continuous twin column still of Foursquare Distillery, aged in Barbados for 12 years in ex-bourbon cask American white oak. Presented at 60% alcohol by volume, without chill-filtration, at its natural colour, and free from sweeteners and other flavourings.

Foursquare 2009 offers a complex and evolving sip. A rich intensity that is balanced in its delivery. Its approachability belying its presentation strength. A truly excellent Rum that you would want to return to time and again.

Nose: A complex nose of Dried apricots, sultanas, and zesty lemon peel. Tamarind syrup, fudge, and a hint of cloves and caraway seeds. Crispy bacon, cedarwood, toasted bread, and a hint of eucalyptus.

Overall: This is a complex Rum, and one that delivers with a pleasing intensity. It feels like one might get lost in the nose alone, long before taking a sip. Taking your time is to be recommended as this Rum continues to reward exploration.

Another fabulous release from the Doorly's rum range! Doorly’s Fine Old Barbados Rum Aged 14 Years is a blend of Pot and Column distilled rum. The rum has been aged for 14 years in ex-bourbon casks. A portion of the blend was aged in ex-Madeira casks. Woody oak notes dominate initially giving to some fruit. This is more dark fruits though – blackberries and some prunes. The palate has an almost charred note to it. Little bursts of vanilla and some ginger fade in an out of the mix. The mid palate shows more of the Madeira influence. Notes of red wine and blackberries mingle alongside dark chocolate and some faint notes of marmalade. Finish wise we are left with a spicy and slightly heated end to the rum – white pepper and lots of ginger and a trace of cinnamon. The finish is very long and the rum lingers for a long time.

Column-distilled in Latin America, Rathlee’s then makes its way to Cornwall in charred white oak cas

An excellent golden rum from the talented folk at R.L. Seale's Foursquare distillery in Barbados. Do

So-named because the current owner's great grandfather worked for the local railway company, this 15

Light and leafy with a hint of pear and blossom. An easygoing match for almost anything.

Mr Goose Esq Shiraz is from the Berton Vineyards in Australia whose vineyards are in High Eden, a su

"MIREA, I've just drunk a wine named MIREA! And suddenly that name, will never be the same, MIREA! S