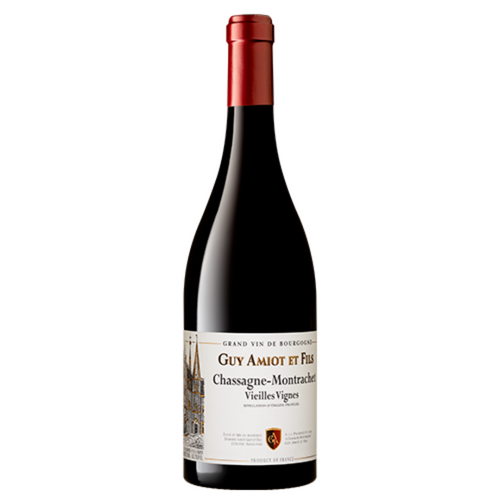 Harvested from 12 different parcels, whose exposure varies from North East to South West, planted with vines that average over 50 years of age. Packed with classic Pinot Noir characters, wild strawberry sweetness, floral with a hint of hedgerow.

Seductive and elegantly fruity with sweet cassis and blackberry aromas, this lovely wine has a juicy palate of raspberries and blackberries. Popular in Parisian restaurants during the 1920s and 1930s, these irresistibly supple and refreshing reds are increasingly sought-after once again.

Domaine Guy Amiot in Chassagne-Montrachet possess an enviable line-up of top crus. Under Arsène Amiot, in the 1920s, the estate started acquiring vineyards in Chassagne including Caillerets and a few rows of Le Montrachet itself. More parcels were added in the 1930s, including Macherelles and Les Demoiselles in Puligny-Montrachet. By the time Guy Amiot took over in 1985, followed by his son Thierry in 1993, the domaine had built up a very impressive collection of holdings. Never exuberant or showy, Amiot’s whites are about layered mineral fruit which express the terroir. The reds, including their Chassagne-Montrachet Rouge, show low depth of fruit. With a respect for the traditions of the past, and an eye on the future, quality has never been better at this highly regarded domaine.

An estate that has been run by the same family for several generations, Domaine Rossignol-Trapet is

Jacques Carillon’s cousin, Jean-Marc Pillot, has reduced the amount of new oak that he uses in re

This has got to be the wine of the summer! Tiny, tiny production so grab yours whilst you can. TAMLY

This Sauvignon de Touraine 'A', is a long-standing favourite of ours and represents great value. Lif

Often referred to as the Grand Cru of the Midi (South of France), the Mas de Daumas Gassac top-tier

Thrapsathiri 100%. "Armi" is the word they use in the Cretan dialect to define the top of a mountain